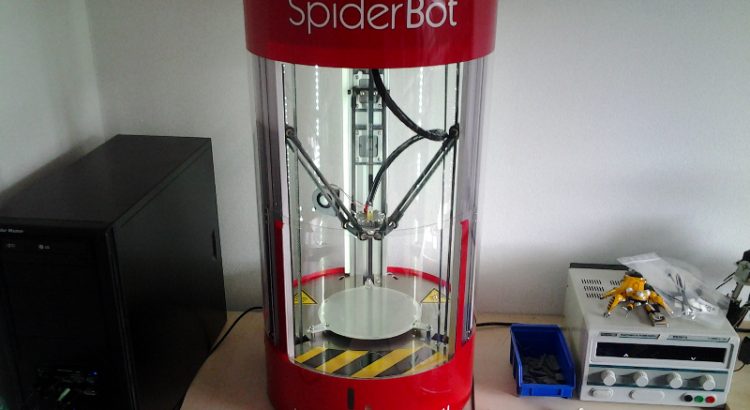 To have more manufacturing capabilities at home for fabricating parts for my hobby, the choice has been made to purchase a 3D printer. Once decided to get one of these, the real party begins. 3D printers come in all shapes and sizes in the hobby sector, each with its own set of functionality and price tag. Going over a lot of the existing material on the Internet on this topic, knowing which 3D printer can do what and how reviews turned out helps a lot. After this, a list of requirements has been defined, keeping in mind 3D printer possibilities and the needs for my hobby projects.

The printers that made it through the selection process:

As can be determined from the title of this post, the eventual choice was made to purchase a Spiderbot 3D printer. After ordering it the delivery time was about 7 weeks. It took a long weekend of work (~10 hours) to assemble the whole machine. In reality the machine proved a lot bigger then expected, not a problem, it looks very impressive standing next to me on my desk. Unfortunately there were some minor issues with he printer, given that this was the first Spiderbot production run, these were to be expected. De supplier support was very good, within a few days I had a new part instead of a broken one. A very inconvenient and time consuming issue, which was eventually solved, was the overheating of the Pololu stepper motor controllers. This caused the motors to sometimes move to much or not at all, causing the print head to drift a bit. By mounting a fan on top of the controllers this seems to be fixed.

The first few test prints were not so successful due to the overheating issue, the prints after that were a lot smoother. The first part of the Tachikoma robot has also been printed. It become apparent that a lot can be gained by optimizing ones design for 3D printing. To this end a coarse can be followed on Udemy, brought to you by Makezine, Design for 3D printing (link).

Below, several images from during the assembly, some of the first faulty test prints, some test prints after fixing the overheating issue and the first Tachikoma robot part.