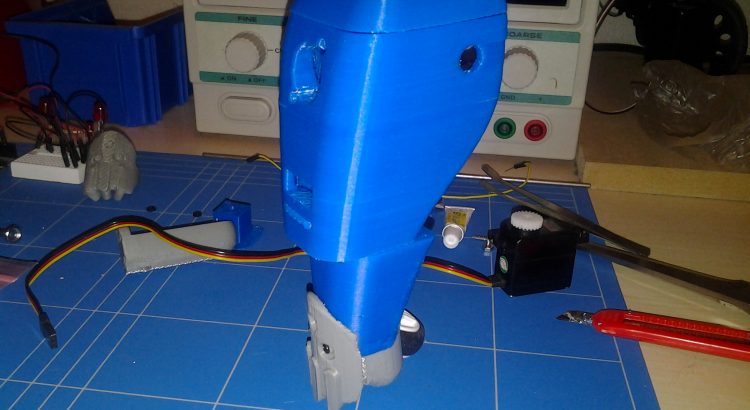 Several parts for the Tachikoma’s third prototype leg have now been printed in both blue and gray ABS. In this article an overview, with images, lessons learned and design considerations for the next print iteration.

The first part to print was a frustrating process, in retrospect this had a whole lot of different reasons. An overheating problem with my stepper motor controllers, choosing the wrong orientation to print a part in and printing without a raft were some of the more dominant ones. Definitely also due to some user inexperience. In the end, they were all solved. Keeping in mind that design for 3D printing is also a bit of an iterative process where one usually has to repeat the same print a couple of times, the eventual end result is very much worth it.

The wheel cover at the end of the leg was chosen to be printed first.

The part connecting the leg to the wheels and that also houses the drive mechanism was printed second.

Switching from gray to blue, it was possible to start printing the leg. It was cut up in to three pieces.

To improve the holes in some of the 3D printed parts I have opted to buy a drill press. A basic model from the brand Topcraft from the ALDI. This model is apparently branded under several different names, as the manual pointed me to Varo.com (link).

As a test, several sizes red LEDs were ordered (5 and 8 mm) and connected with an Arduino. These LEDs will be used as signal lights to show the steering direction.

Blinking LEDs for the rear of the Tachikoma Canopy