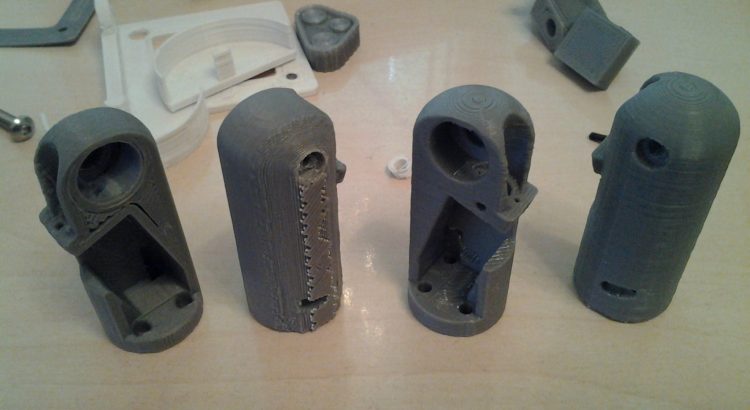 Haven taken some time off from work for the Christmas holiday season, I am back in the saddle of building/designing my robot. Hereby the fruits of my labor for the first week. The efforts so far have been in optimizing the design for printing and assembly. This mostly involved foreseeing problems, correcting them, printing, finding new problems, more corrections and repeat for next part…

The drive steer connection was improved by printing it more as a pillar with some internal support that could be removed. Certain holes were given better dimensions. They will be drilled out with a drill press for the correct dimension. On the left, two of the old attempts. On the right, 2 improved attempts, where the utmost right has better dimensions (hard to see) for part space optimization.

The wheel covering ornament (it really doesn’t do much more then look pretty… ) was printed in its regular orientation at a low z-layer height of 0.2 mm. Improvements from left to right. The design has been improved even from the third print, to get rid of the discrepancies of some support material that was printed unnecessarily and to have thicker walls.

To connect the bottom part of the leg with the middle, I came up with a 4 hole pattern in the bottom and some plates supported by ribs at the bottom of the middle piece. When printing both of them on the build plate without support, they will be completely flat and thus fit very nicely and can be connected with four bolts/nuts.

During an assembly attempt of the middle leg piece with servo and sensor, unfortunately I learned that the sensor mounting bit was in the way for the servo to be placed. Thus I took that bit away and printed it separately. Thanks to Eric Scott (link to his blog) for some Solidworks pointers it was an easy feat.

Some lessons learned and design things I picked up along the way.

– It is never bad to stop a print somewhere halfway just to prevent designing a half part if you just want to use something for an impression or verifying the dimensions.
– 45 degree angles can be built in just about anywhere, even for some holes. This prevents the need for support with circular overhangs. Reduces print time and material usage. I designed some raindrop shaped holes in several places for this.
– Holes always seem to come out a little bit smaller when printed then in the design dimensions. This seems to be a 3D printer thing in general. When possible, I have now chosen to just print a small hole and then drill it to the desired side with a miniature drill set. The existing hole can act as a guide for where to drill. To find the correct diameter/radius, this page on reprap.org has a very good reference table (link). Note, the refer to radius.