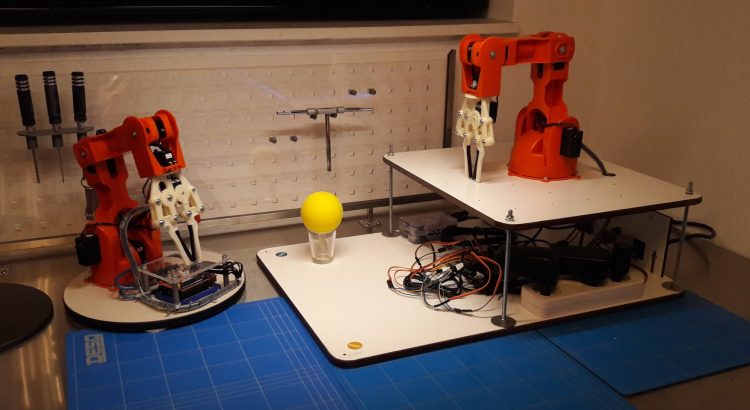 As  new project I am looking to experiment with fruit and or vegetable harvesting using a simple robot arm and some fake plants at home. This project will consist of three parts (for now) and involves the following aspects:

This post will describe the steps taken for part 1. The end result so far is a Raspberry Pi that can send serial commands to an Arduino which in turn controls a robot arm through a servo controller. My next step will be to create a hosted webpage on the Pi to control the arm. Most likely using Python and Flask.

For convenience of development, testing and keeping the workspace clean a platform has been  designed to mount all the components that were required. Once the components had been selected, an initial 3D design was made. With the help of a friend we fabricated and elaborated on the design. Tools and materials used for fabrication where Trespa panels, some power tools and a CNC mill to create the more accurate and delicate parts. A control panel is used to hook up cables and control the power of the robot arm assembly.

The following hardware has been used:

To find a robot arm within a price range of 100-500 was not easy. I was looking for an arm that can carry around 50-150 grams, had a gripper, 3 to 4 Degrees of Freedom (DOF), +/- 5 mm repeatability and could understand “go to XYZ O” commands. Especially the last requirement was surprisingly hard to find in the hobby sector. Very few robot arms seem to come with an Inverse Kinematic (IK) engine and when they do, it can only be controlled through a GUI and not a software interface. I evaluated the following robot arms:

The choice was made to order the Braccio robot arm, mostly because it looked very nice and orange, similar to the Kuka industrial robots. Functionality wise it checked out in line with the specs. Given that it only came with same basic firmware that utilises the Braccio shield, which I opted to switch out for the SSC-32 the firmware would have to be made.In the end this took a couple of days work.

Interface from Pi consists of three types of command formats:

Where each command is put in between and start and end character < and >. This was based on Serial commands example 3 and 5 from the Arduino forum (link).

The Inverse Kinematics (IK) are based on the code and comments from the circuitsathome website (link).

In the video, a sequence of several commands from the Pi is executed in order:

Which is the following set of serial instructions in a row, put in a bash script for convenience:

The Arduino code is to long to be put here and will be placed on GitHub once it has been cleaned up.